Colonic varices are usually related to hepatocellular, portosystemic or other co-morbid conditions. Lesions of idiopathic origin are uncommon and they present as profuse rectal bleeding or with long-standing anemia. Case summary: Here we described an unusual case of colonic varices presented with minute hemorrhage with stool and had no evidence of any systemic or organ disorder. Very few cases of such lesions have been described till now. Idiopathic colonic varices are very rare and clinically misleading. But a differential diagnosis should be considered in cases where patient presenting with rectal bleeding of varying degrees of uncertain cause.

Colonic varices were first described in 1954. Most of the cases published in the literature were related to hepatocellular or portosystemic diseases. Isolated colonic varices of unknown etiology are a very rare concern. Most of such cases were discovered due to profuse rectal bleeding of the undiagnosed cause. Lesions like this with the minimum presenting feature itself very uncommon and clinically challenging.

A 65 years old male patient presented in the outpatient Department of the Digestive Diseases - II with chief complains of the passage of blood with stool for 3 months, mild abdominal pain, and constipation. The amount of bleeding was minute and not fresh. The patient had a habit of regular smoking and alcohol intake. On examination, the he was found anemic but generally healthy. His abdomen was soft and mild diffuse tender. He was non-diabetic and non-hypertensive with no history of hepatic disease or surgery. His blood routine examination revealed anemia (Hb 90 mg/L), biochemistry for the liver function tests and viral markers were not significant. Ultrasound detected mild Hepatomegaly with no other associated changes. The fecal occult blood test was positive. Colonoscopy evaluated multiple dilated veins 30 cm distal to the anus with evidence of fresh hemorrhage (Figures 1 and 2). For further evaluation and to rule out portal hypertension, an upper gastrointestinal endoscopy and abdominal CT was done. But no significant abnormality was detected. A conservative therapy with laxative, oral iron preparation (Ferrous sulphate 150 mg in combination with folic acid 0.5 mg once daily), and diet modification was advised. The patient's condition was gradually improved. On his 2nd followup after 30 days of diagnosis, patient confirmed no evidence of blood in stool for last 10 days. 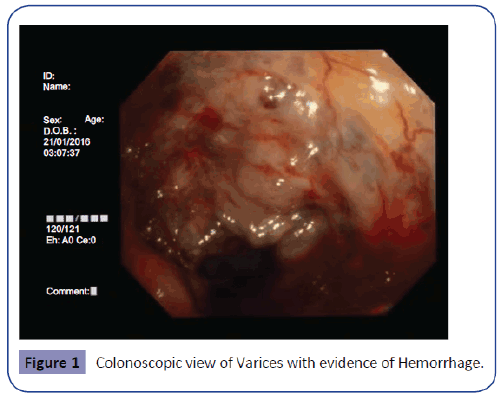 Figure 1: Colonoscopic view of Varices with evidence of Hemorrhage. 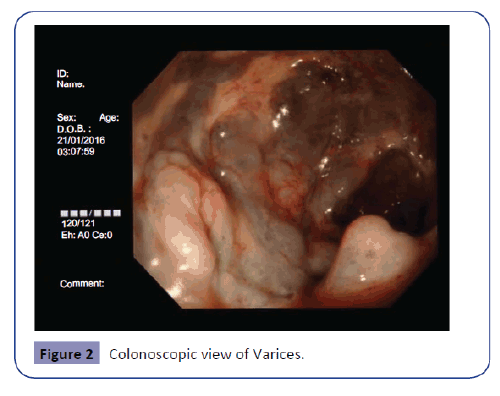 Varices are usually seen in the esophagus, stomach, small bowel, biliary tree, and rectum, besides this, they are often found in the surgical ostomy location. Gastric and esophageal varices are commonest among them. Lower gastrointestinal varices are mostly related to portal hypertension [1-3]. Other then this congestive cardiac failure, biliary sclerosis, biliary atresia and superior or inferior mesenteric vein thrombosis can lead to colonic varices. Abdominal surgery may also predispose to formation of such lesions. Clonic varices of idiopathic origin are very uncommon and less reported. Idiopathic colonic varices may present with recurrent or sometimes massive hemorrhage [4]. They are common in male and occasionally detected [5-7] throughout the whole colon. Mechanism of bleeding are thought of by the passage of hard stool, besides this varices can also stretch the mucosa and cause injury [8].

There is no existing proper guideline for the treatment of colonic varices. Management is mostly symptomatic and depends on the causes. In the case of hepatocellular disease and portal hypertension, this includes transjugular portal-systemic shunt and colectomy. Sclerotherapy, band ligation, and surgical management are the existing method for the control of variceal bleeding. In the case of less bleeding conservative therapy with a laxative is recommended for stool softening [7,8].

Our above-described patient presented with a history of altered bleeding with stool for three months. The bleeding was minute in amount and he was constipated (Once in every 3/4 days). On evaluation, multiple varices were seen in the colon 30 cm distal to the anus with a small amount of hemorrhage. “Idiopathic colonic varices” was confirmed by further esophagogastroduodenoscopy, abdominal CT, and biochemical examinations. This ruled out the possibility of portal hypertension or other organic condition. As the bleeding was not severe and the patient was hemodynamically stable he was advised for a conservative therapy with osmotic laxative and oral iron. Multiple followups were scheduled with a plan for sclerotherapy if conservative treatment does not respond.

Idiopathic colonic varices are very rare presentations. Such cases are important because of their potential hemorrhagic threat and outcome. A differential diagnosis should be considered in cases where patient presenting with rectal bleeding of varying degrees of uncertain cause.

Authors are grateful to all the professors and Doctors of Department of Digestive Diseases - II, First Affiliated Hospital of Jiamusi University for their generous support.